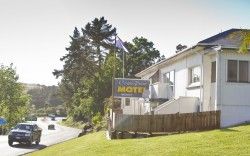 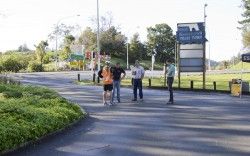 We stayed at the Centre Point Motel which was great, right in Kawakawa. Thank you so much for looking after us.
Just as I was setting off I had a chat with the coffee man which made me happy so I started with a smile again. 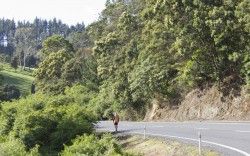 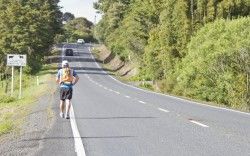 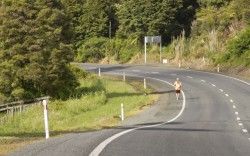 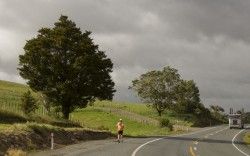 The sun was out in force and it was hot. There were heaps of ups and downs and twists and turns so it wasn’t boring. Feeling good until about 10kms, then got a bit bored and went to listen to my tunes and the bloody battery was flat, not what you need when you need it. So I had to box on talking to myself. Found a cafe and had an athletes snack of a Banana milkshake followed by a coffee and talked to some locals which did what the tunes would have and I was off. 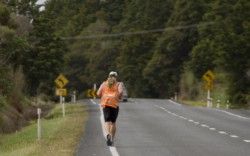 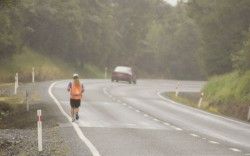 Then the rain came back for a bit which was cooling more than anything. 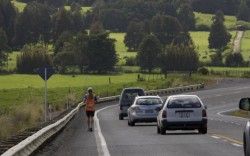 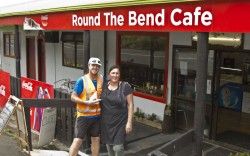 This is the lovely lady from the cafe we stopped at , they donated us our sammys, big thanks for that. Awesome coffee and very friendly people here at the Round the Bend Cafe. 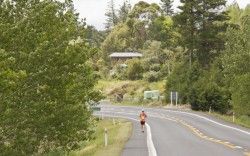 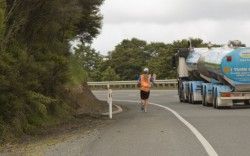 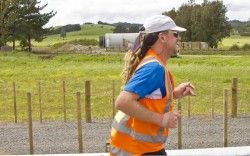 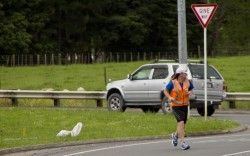 I’m still waving to every car and still getting a great response which is great. I had the tunes back in my ears now and up went the speed and I danced my way along the last 20kms into Kamo. We did 50km bang on today which was a little more than planned as I was looking for a park that I had seen on the way up to finish at but it never came and I thought I had better stop and leave some for tomorrow.
I am a bit lonely tonight as I have lost Rick, he is gone for 2 days to go to his gr andads funeral. He will be back on Friday night but kinda strange not having him there, he has been with me the whole way. Send my love to the family bro! Just as I was thinking the other day about who would drive the van while he is away I had a call from Josh who has been a carer for Nick Chisholm in Dunedin. Josh is up to see the family and had called to see if we had time to go fishing and I dropped in that I needed help. He was keen straight away which was great, can’t thank him enough. Keeps the Guardian on the road and us moving towards the finish line. 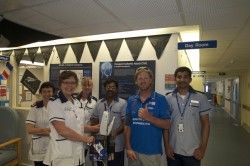 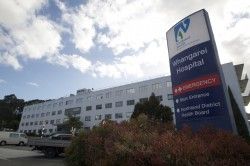 I had had an email from Ria Kemp who works at the Whangarei Hospital in the Stroke rehab ward asking us to come say hi, so I jumped at the chance to meet more people. So awesome to hear their stories and get some extra power from everyone. Thank you all so much for inviting us in to see you. Keep positive and work hard everyone. Thank you Ria.
We hit the 2700km mark today, still climbing….
Today’s Route – Zoom out to see where I ran…